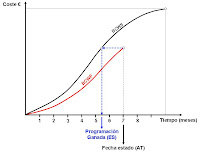 The Earned Schedule (ES) Technique is an extension of the Earned Value Management (EVM) technique that has recently been recognized by the Project Management Institute (PMI) as an emerging practice. This new approach lies on the powerful concept of Earned Schedule, which was first introduced by Walt Lipke in his seminal paper “Schedule is Different”. The reason that motivated this extension was the well-known feature that there are several project scenarios where some EVM schedule indicators such as SV and SPI show an unexpected behavior at certain state of the project turning out useless to make predictions. You can go into this technique by visiting the Earned Schedule website and reading the public domain documentation you will find there. Because it is a very recent practice, major scheduling software packages do not incorporate it as far as I know. In order to perform automated calculations of ES magnitudes you can use Lipke’s ES Calculator, an Excel Workbook that works out these magnitudes from the corresponding BCWS and BCWP project costs.

With the aim to make use of ES in some kind of medium and small projects usually scheduled, and only scheduled with Microsoft Project (MSP) –I mean by this that cost constraint is not managed with it; I have developed a VBA macro that arranges monthly reports of both EVM and ES indicators. This macro has been written thinking of projects which activities are mainly performed by labor resources so you can set up them as effort-driven activities. In such a way, activity costs are proportional to the activity effort, labor-hours for instance, as well as it is its duration. Then you do not need to track costs but just work. In my experience with this kind of projects and the relative immaturity of organizations that normally perform them, trying to track projects with MSP within both time and cost constraints becomes quite often unsuccessful. Another drawback of MSP is that there is no way to keep record on the same file of the EVM indicators of former reports; you are not able to plot S curves too. Finally, ES technique is not yet implemented.

You can see how it works on this sample MSP file. This file has been created with a MSP 2003 version, so if you are to open it with a different version you have to select the right versions for the following libraries "Microsoft Project xx.x Object Library" and "Microsoft Excel xx.x Object Library", where xx.x is the library version for the corresponding MSP version -for instance 11.0 for MSP 2003. You can find these libraries on the Visual Basic editor by clicking on the menu: Tools-->References. Also, in order to get the file open you must check your macro’s security level in order it allows running not signed macros. Once the file is open, a new menu called “Reports” appears on the menu bar; click on it to run the macro and get an Excel report. The project you see is an 18-month one that has been rescheduled monthly six times since its beginning. If you want the macro to run properly you must record a baseline when the project plan is done, and assign an appropriate status date each time you perform the project update. Every time you run the macro in a monthly basis, the MSP file records at the same time the values of EVM and ES indicators of the corresponding period. So you can see the values for the period preceded by the values corresponding to previous periods (months); then you do not need to get a different Excel file for every period. This feature allows plotting the S curves and indicator evolutions. The cost magnitudes are measured in labor-hour units, and the time magnitudes in either month or day units.
Publicado por Diego Navarro a las 23:00